On Tuesday 30th October I was privileged to be able to attend the Think Global, Act Local Sustainable Development Goals Symposium in Newcastle, hosted by Newcastle City Library and ALIA. 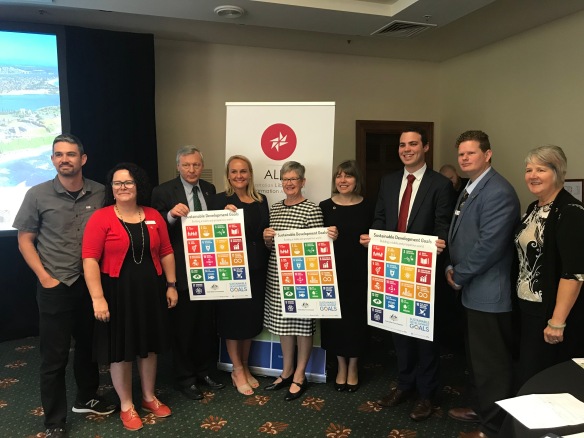 The day began with a global focus, as our first speaker was Christopher Woodthorpe from the United Nations office in Canberra. Mr Woodthorpe explained the Sustainable Development Goals, also known as the 2030 Agenda, which I first heard about through the Turbitt n Duck podcast episode with Pamela McGowan.  The Sustainable Development Goals (SDGs) were unanimously agreed to by all 193 UN Member countries and are the “people’s agenda”.  Libraries support sustainable development through equity of access and supporting all people to reach their potential, especially those who are marginalised. ALIA has been one of the biggest supporters of the SDGs in Australia, as they recognise the importance of libraries in promoting them.  Mr Woodthorpe also recommended we read “The Museum of the Future” post on the role of the GLAM Sector in supporting the SDGs.

Next we heard from IFLA president-elect Christine Mackenzie about the International library perspective and the World Library Map.  Ms Mackenzie spoke about how information poverty contributes to financial poverty, which can become an ongoing cycle.  She cited the four barriers to eradicating information poverty to be laws, attitudes, skills and cost.  Above all she said “Libraries are an investment, not a cost”.  The World Library Map uses storytelling to promote the work of libraries in supporting sustainable development and is open for contributions. 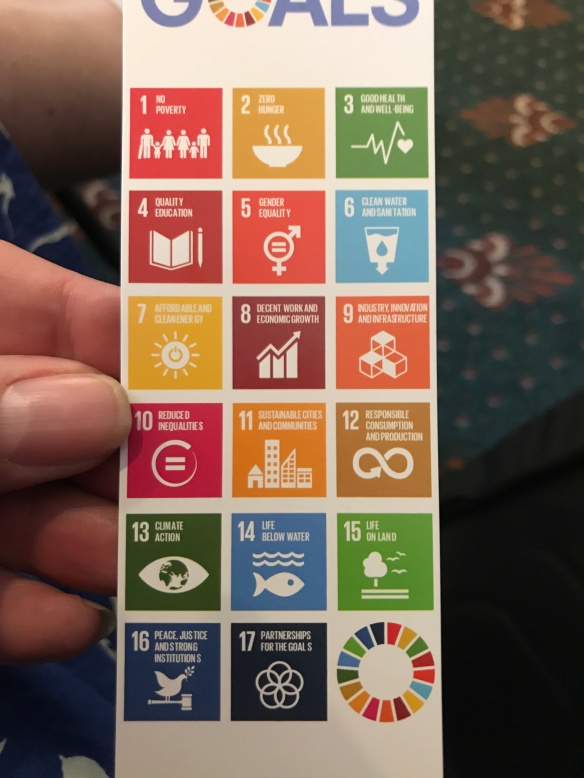 The discussion then moved more local, with ALIA director Sue McKerracher speaking on the work of ALIA in supporting the SDGs in Australia.  She expressed that the government did not at first want to come to the table to discuss the SDGs, until ALIA was able to demonstrate how it could support reporting them.  The big message from Ms McKerracher was “No data without stories; no stories without data.”  ALIA have some information available about how Australian libraries support the SDGs.

Next, we heard from Mylee Joseph about what the State Library of NSW is doing to support the promotion of the SDGs.  The staff played SDG bingo – here’s a service we provide, which of the goals does it fit under? It can be a good way to reframe the existing work of the library to support the SDGs, rather than feeling like supporting them is yet another thing to add to the library.  Home Library Services in NSW are working to support marginalised people, and NSW libraries have trained nearly 7000 seniors in digital literacy.  Ms Joseph proposed that our biggest challenge is to share our work with others who don’t “speak libraries”.

Our last speaker was Lord Mayor of Newcastle Nuatali Nelmes and the Deputy Lord Mayor Declan Clausen, on how Newcastle has worked as a city to set the standard in meeting the SDGs.  Their strategic plan is available online.  The UN have found that they have been able to build better relationships with individual cities to work on the SDGs than they have at a national or state level.

The afternoon session was a Q&A session followed by some workshopping.  The workshops highlighted for me how out of touch with the community some libraries are, and how focused they are on serving the upper and middle class and can forget the most marginalised people in our communities.  As an aspiring librarian, there was a lot I could learn but not a lot of action I can take yet.  However, we were challenged at the end of the day to commit to one action we can take to promote the SDGs.  This blog post is part of my commitment to promoting the Sustainable Development Goals in the library sector.

If you want to know how Australia is doing in its work towards achieving the Sustainable  Development Goals, the Department of Foreign Affairs and Trade has a paper available for download.